PETA Senior Director Jessica Sandler was walking her dogs at a local ballpark when, on a hunch, she decided to check the two dumpsters at the far end of the parking lot to see if any animals were trapped inside. This is what she found—or should we say whom she found: 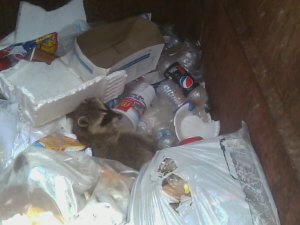 Jessie considered creating an escape “ladder” out of nearby logs, but not knowing if the baby raccoon was old enough to survive on her own even if Jessie were able to free her, she instead called a reputable wildlife rehabilitator for assistance. The rehabber arrived within 45 minutes, put on a pair of heavy gloves, jumped into the dumpster, and lifted the exhausted youngster to safety. 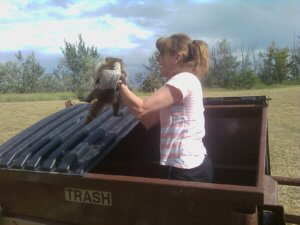 As Jessie had suspected, the baby needed follow-up care, so the rehabilitator put her in a carrier and took her to be treated for dehydration. After she recovers her strength, she’ll be released into a safer area. 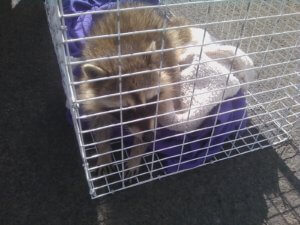 What You Can Do

Whenever you pass near a dumpster, take a quick peek inside to make sure no wild animals are trapped. Once you’re sure that the dumpster is empty, shut any doors or lids to prevent animals from gaining access. And write letters to the editor of your local newspapers encouraging your city’s waste-management companies to install spring-loaded lids on garbage containers to keep animals from entering them.

Always check your own trash cans and recycle bins and secure them before putting them out on trash day. And don’t forget to crush all cans, put the lids on jars and plastic bottles, and cut apart plastic soda rings and food containers before discarding them.